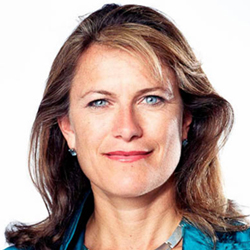 Jacqueline Novogratz is the founder and CEO of Acumen Fund, a nonprofit global venture fund that uses entrepreneurial approaches to solve the problems of global poverty. Acumen Fund invests patient capital to identify, strengthen, and scale business models that effectively serve the poor and champions this approach as an effective complement to traditional aid. Acumen Fund currently manages more than $60 million in investments in South Asia and East Africa, all focused on delivering affordable healthcare, water, housing, and energy to the poor in Pakistan, India, and Kenya.

Jacqueline started her career in international banking and has since worked across Asia and Africa finding new ways to use business as a tool to create a world beyond poverty. Prior to Acumen Fund, Jacqueline founded and directed The Philanthropy Workshop and The Next Generation Leadership programs at the Rockefeller Foundation. She also founded Duterimbere, a micro-finance institution in Rwanda. She began her career in international banking with Chase Manhattan Bank. She is currently on the advisory boards of Stanford Graduate School of Business, MIT's Legatum Center, and Innovations Journal published by MIT Press. Novogratz serves on the Aspen Institute Board of Trustees and the board of IDEO.org, as well as a member of the Council on Foreign Relations and the World Economic Forum Global Agenda Council for Social Innovation. She was recently named to Foreign Policy's list of Top 100 Global Thinkers and The Daily Beast's 25 Smartest People of the Decade. She is a frequent speaker at the Clinton Global Initiative and TED.

Jacqueline Novogratz has an MBA from Stanford and a BA in economics/international relations from the University of Virginia. Her best-selling memoir, The Blue Sweater: Bridging the Gap Between Rich and Poor in an Interconnected World, released in paperback in February 2010, chronicles her quest to understand poverty and challenges readers to grant dignity to the poor and to rethink their engagement with the world.