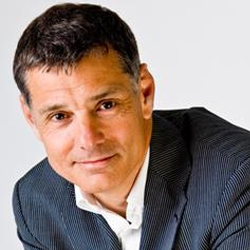 RAF pilot captured by the Iraqis during the Gulf War I

John Peters came to the world’s attention in January 1991, when his bruised and battered face flashed onto television screens around the world. It was his disfigured image that became a potent symbol of Saddam Hussein’s ruthless aggression. His dramatic and sometimes harrowing experiences reach deep into our innermost minds, showing us how we can overcome even our worst fears and nightmares. His war was not all as he expected – it became a seven-week ordeal of torture and interrogation testing John Peters to the absolute limit and bringing him close to death.

John is an experienced speaker of international repute to corporates, public sector and charities. He was the sole reader representing the British Armed Forces at the National Gulf Memorial Service, in front of Her Majesty, The Queen and presented the Sir James Martin Lecture at the Royal Aeronautical Society in the presence of Prince Philip and followed Mr. Nelson Mandela on stage in South Africa. He has written two best-selling books and the documentary, ‘Tornado Down’ was Independent Documentary of the Year and a BAFTA Award Nominee. He has extensive international TV, radio, and PR and media experience.

During his RAF career, he flew Tornado GR1 on various squadrons and then, within the MoD, he led programmes on leadership, safety and human error in aviation. Using this experience, on leaving the RAF, he founded a management consultancy providing business critical development, consulting and coaching - through a leadership lens. His previous clients include Capital One, Virgin Media, NDS, Lloyds Bank to name a few. With particular areas of interest being uncertainty, organizational learning, trust and failure, he is currently writing a book on leadership.

As the Director of Performance, he designed the Executive MBA at Aston Business School. He is Fellow of Kingston Business School and Henley Business School and a former Chair of the Association of MBAs. In addition he runs the Leadership Module on the EMBA at the Academy of National Economic in Moscow. He is Patron to the charity, KidsOut, Honourary President of Throckmorton Airshow and a Governor of Worcester Royal Grammar School.