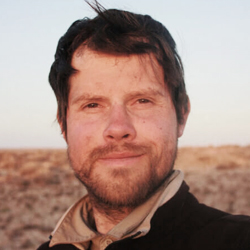 Louis-Philippe Loncke is a versatile explorer and adventurer. He has completed world first expeditions on diverse terrain. As an engineer and management consultant, he plans meticulously the solutions which have allowed him to succeed in extreme unsupported expeditions that no one else has attempted before him.

During his 11 years of corporate work in top publicly traded companies, he has become certified in project management, service management and process improvement and has worked in logistics, banking, food and sports retail, utilities, transportation and telecom.

At the age of 27, Louis-Philippe had no clue about the exploration world and adventure community until a late passion for scuba-diving brought him to travel one year in Oceania in 2004. In Australia he saw a movie about a solo desert crossing without any assistance, and subsequently two years after, he would start breakthrough world first treks across deserts himself. He received recognition from the locals after struggling across Tasmania’s wilderness for 7 weeks, and as a result, he has acquired a strong and positive mental mindset. In 2015 he did an unsupported traverse of Death Valley National Park from North to South.

In 2008, he surprised the Australian news by becoming the first person to walk completely unsupported across the length of the Simpson Desert, the most arid one of the country. He is one of the three solo outdoor lab-rats to perform cognitive tests in expedition for the scientific program decision taking under stress in extreme environments. Since 2009, he has done several world first expeditions, charity or environment expeditions, in the valley of the Everest, in Iceland, Australia and Belgium, to emphasise the importance of water.

Over the last few years, Louis-Philippe has become one of the most respected adventurers and explorers of his generation. His ability to prepare expeditions in a short time while continuing his day job as management consultant have amazed veteran explorers. His passion for adventure and exploration goes beyond his own achievements. He travels all over Europe meeting other explorers to share experience, build strong connections and discuss new projects.

He has contributed to several expedition books and articles as his versatility and engineer approach add value to the mindset of preparation and expedition focus.

In 2011, he took a 1 hour kayak lesson and the week after he started a 600 km kayak expedition around Belgium showing the beauty of the country and showing the water pollution. After this expedition he was chosen as an ambassador for NGO Roots and Shoots. He has been selected as torchbearer for the London 2012 Olympics. He is a member of the Explorers Club and a Fellow of the Royal Geographic Society. He is a volunteer, director and board member for NGO Art in All of us.

He is currently preparing for other expeditions and developing a consultancy and coaching business.

Louis-Philippe speaks on many topics including expanding boundaries to solve daily challenges, motivation, focus and decision taking under stress in extreme environments.