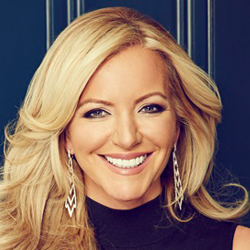 Michelle Mone (Baroness Mone of Mayfair) was founder of Ultimo Brands International, one of the UK’s leading lingerie brands for the last two decades.

Michelle grew up in Glasgow when, at the age of fifteen, her father fell ill and was subsequently declared paraplegic and wheelchair bound for life. This forced Michelle to leave school with no qualifications in search of full-time employment, sparking her instinctive entrepreneurial spirit. After several years working as a model, Michelle secured a job with Labatt’s Brewers, excelling herself to Head of Sales and Marketing for Scotland at just 22 years old. Unfortunately, Michelle was made redundant just two short years later, leaving her down – but not out – after her taste of success.

In 1996, after only six weeks out of work, the idea behind Ultimo was born. It was at a dinner dance, wearing a very uncomfortable cleavage-enhancing bra that Michelle had the epiphany on what the lingerie industry was missing. She would go on to create a bra exceeding in cleavage-enhancement and uplift; allowing women to look and feel good without having to sacrifice on comfort. After the launch of Ultimo, Michelle quickly established herself as one of Scotland’s finest exports, winning the World Young Business Achiever Award in 2000 at the Epcot Centre in Florida, as well as Business Woman of the Year at the Corporate Elite Awards in London. Her status as a leading entrepreneurs was further confirmed when Prince Charles invited her to join the board of Directors for The Prince’s Trust.

Michelle is now a frequent speakers and was asked by the Government to conduct The Mone Review, an insight into helping start-up businesses in deprived areas gain the support they need to succeed. After a challenging few years in her private life, suffering an acrimonious divorce and a battle to retain her business, the proud mother of three has now sold Ultimo to global lingerie giants MAS Holdings.