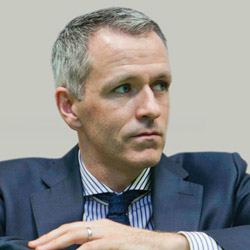 Based in New York, Mike is one of the World's leading authorities on elite talent and high performance, having worked in the English Premier League soccer since 1998, he is widely recognized as a leading figure in the EPL and European Soccer for creating 'game changing' methodologies around management of world class, multicultural talent. His work in pioneering new practices in the elite sports world have become a benchmark for leading teams across the globe.

Mike's role included dealing with all areas of performance and team operations relating to the 1st team, including player recruitment; medical; sport science; psychology and performance analysis. In this period Chelsea won the UEFA Champions League, UEFA Europa League, Premier League title and three FA Cups – the most successful era in the clubs history. He was responsible for overseeing over $500 million in player transfers into the team including multiple FIFA World Cup, European Championship and UEFA Champions League winners. He also worked very closely on a daily basis with some of the sport’s greatest ever coaches including Jose Mourinho, Carlo Ancelotti, Luiz Scolari, Guus Hiddink, Andre Villas-Boas and Rafael Benitez.

(English Premier League) – the Oakland A’s of the EPL.

Mike also serves as a Non-Exec Director with Lawn Tennis Association / Wimbledon and has advised on High Performance Cultures and Talent Management across a variety of Global Sports including International Rugby Union; International Cricket and F1.

He is currently a strategic advisor to the San Antonio Spurs NBA team in the US and McLaren Formula One Applied Technologies division. Mike also sits on the Board as a Non-exec Director on two major Private Equity Funds specializing in the Sport, Leisure and Entertainment space.

Finally, Mike is a sought after expert in Sports Business discussions, drawing on his elite experience to impart and develop wide ranging learning, integration and best practice in High Performance and its practical implications and transfer to the world of business. He currently delivers over 35 keynote speeches per year across the globe on High Performance and Talent Management themes to some of the leading private businesses in the world.