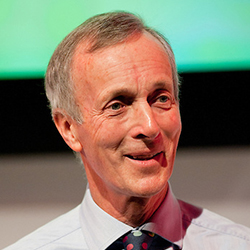 One of the longest serving and most successful leaders of a blue-chip company and a highly regarded businessman, Sir Stuart Hampson was chairman of the John Lewis Partnership for 14 years until his retirement in March 2007.

A popular and likeable businessman, Sir Stuart joined the partnership in February 1982 following a twelve year career in the Civil Service. After gaining front-line retail experience in a number of department stores, he ran the Partnership's department store in Southampton, Tyrrell & Green (now John Lewis Southampton), as Managing Director for nearly three years.

In 1986 he was appointed to the Partnership's Central Board as Director of Research & Expansion and took charge of the Partnership's development programme. He was responsible for the first out-of-town John Lewis department store at High Wycombe (opened October 1988), as well as for new department stores at Aberdeen (October 1989) and Kingston (September 1990) and the relocation of Trewins in Watford (August 1990). The Deputy Chairmanship was added to his Partnership responsibilities in May 1989, and he became the fourth Chairman of the Partnership in 1993.

During those 14 years at the helm of JLP Sir Stuart presided over a courageous programme of modernisation, and all without sacrificing the partnership ethos and principles that were embodied in its 1929 constitution co-ownership and the happiness of its staff. His 14 years as chairman saw steady expansion, the refurbishment of the Oxford Street and Sloane Square department stores, the extension of trading hours, the expansion of the product range and the establishment of an online presence through John Lewis Direct and Ocado, the home-delivery grocery service.

The partnership's 2006 results, announced shortly before Sir Stuart's departure at the end of March 2007, are a testament to his efforts. Pre-tax profits hit a new high of £319m, up 27 per cent on the previous year, and the 68,000 staff -- or "partners" -- shared a bonus of £155m, up 29 per cent from 2005 and equivalent to 18 per cent of salaries. The fact that John Lewis continues to outperform the market is a direct result of its partnership structure, says Sir Stuart. "Our success comes from a host of improvements made by 68,000 people who are motivated to deliver outstanding customer service, which translates into profits that feed back to staff", he says. "It's a virtuous circle".

Sir Stuart has taken an active interest in planning policy and in May 1987, as a founding member of the Oxford Retail Group, was closely involved in the debate on town centre/out-of-town development.

The first part of Sir Stuart's career was spent in the Civil Service. He joined the Board of Trade in 1969, then served for two years in the UK Mission to the United Nations in Geneva.

In April 1981 he was promoted to Assistant Secretary and assigned to the team under Sir Derek Rayner which examined aspects of the efficiency of the Civil Service. His project dealt with personnel management in the Department of Trade and Industry.

A founding deputy chairman of London First and past President of the Royal Agricultural Society of England (2005/06), he is President of the Employee Ownership Association and continues to champion the benefits of employee engagement in business. Sir Stuart chaired the team tackling Economic Renewal in deprived communities, and he is one of the Prince of Wales's Ambassadors in this area. He has been a member of the Corporate Leaders Group pressing the government for stronger action on climate change.

Sir Stuart was a member of the Royal Society of Arts Inquiry into Tomorrow's Company: The Role of Business in a Changing World, and became a director of the Centre for Tomorrow's Company in 1996, and Chairman in 1998/99. He was elected to the Council of the RSA in 1995, served as Treasurer in 1997 and Chairman of the Society from May 1999-October 2001.

Sir Stuart was made a Knight Bachelor in the Queen's Birthday honours 1998. In 2001 he was elected to an Honorary Fellowship at St John's College, Oxford, from where he took his first degree (in modern languages) in 1969. He received an honorary Doctorate in Business Administration from Kingston University in January 1998, from Southampton Solent University in November 2001 and from Middlesex University in July 2007.

Sir Stuart Hampson is Chairman of The Crown Estate which manages a portfolio of over £6 billion, including over 400 commercial properties in London and elsewhere, almost 146,000 hectares of agricultural land, forests, residential and commercial property in England, Scotland and Wales, over half of the UK's foreshore, together with the seabed out to the 12-nautical-mile territorial limit.