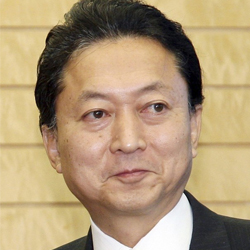 He was the first ever Prime Minister from the modern Democratic Party of Japan. In moving towards a more Asia-centered foreign policy, Hatoyama worked towards making relations better with nearby East Asian countries. He also worked to deepen economic integration within the East Asian region, pushing for a free trade zone by 2020 and proposing Haneda airport as a 24-hour hub for international flights.

Relations with China also warmed under Hatoyama. The first few months saw an exchange of visits, including one by Xi Jinping, for whom Hatoyama arranged an appointment with Emperor Akihito. The Daily Yomiuri reported high-level discussion over a further exchange of visits between the two countries to promote reconciliation over historical issues. "Beijing aims to ease anti-Japan sentiment among the Chinese public by having Hatoyama visit Nanjing and express a sense of regret about the Sino-Japanese War", the paper reported

Hatoyama promised a big cut in greenhouse gas emissions, saying he would aim for a 25% reduction by 2020 compared with 1990 levels. The targets were more ambitious than those of any other industrialised nations. His talk was welcomed at the UN and showed his leadership role in climate change. Although he was Prime Minister for less than a year, he had a wide range of achievements to his name by the time that he left office.