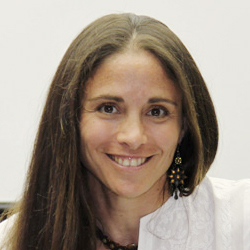 Alexandra Panayotou is a charismatic motivational speaker and executive guide/coach, who works in personal and professional development. She inspires others to strive for more in their lives, and to further develop themselves. Her insight into and her understanding of the human process are developed from her outstanding success as an endurance athlete, combined with her academic background in psychology, sociology, and philosophy where she received an honours degree. Alex regularly presents to and works with leading executives of top global business organisations, including, Danone, Telefonica, Coca-Cola, IESE Business School, and since 2014 she is a stretegic partner of ManpowerGroup Greece.

Alex a unique athlete is an example that it’s never too late to start afresh. She began running at 30 and in 4 years of self-training reached championship level: 2nd in the Barcelona Marathon and 4th in the Greek championships. After winning many races, she began running solo ultra challenges for charity. Her last and final extreme solo running challenge was running 400 km almost non-stop (sleeping only 5 hours during the 76.5 hour challenge).

She achieved all her 13 challenges – one of the few athletes in the world who have never abandoned a challenge or race, thus showing not only her outstanding physical strength but also her dedication, and extreme mental strength. She has achieved physical and mental feats that few people are capable of. During her athletic career Alex developed a strong base of principles, values, and tools for overcoming obstacles and achieving goals, while at the same time placing her health and wellbeing above her sporting carreer. Alex achieved her 13 challenges from 2008-2014 without a single injury. Her philosophy of Personal Excellence forms the foundation of all she does.

Alex was instrumental in developing charity sports in Spain where she has lived since 2003. In 2008 she launched a major movement towards bringing charity sporting events to Spain with her first year of solo running in 2008 – since then she has dedicated her running to national and international charities. Since then she is delighted to have seen a boom in solidarity sports both from individual athletes and from sporting events themselves.

Alex has a passion for writing, her first book “The Smile of Endurance” was published in English and Spanish in 2011 and is based on her gruelling 2010 kilometre challenge. In 2011 Alex won first prize in a literary competition for her short story “Corriendo el Camino” (“Running the Camino”) – based on her 1200 kilometre solo run along the Camino de Santiago, the world famous pilgrimage. Her story was published the same year in the book “Peregrinas por el Camino de Santiago” Alex regularly writes articles for magazines. She is currently publising her 2nd book.

Her methods for success are easily applicable to all areas of life – business, personal, and leisure. Her executive development programs not only deal with the development of executives as individuals and leaders, but also provide all the key secrets and tools for long-term executive success and endurance. Her sports camps are inspirational and educational, and her personal development work is life changing.