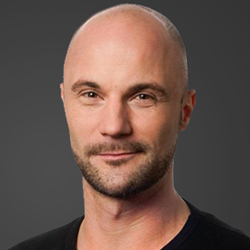 With a passion for concepts of interstellar travel, Angelo Vermeulen brings together science and art to rethink our present and future here on Earth. He loves to challenge established ideas on how people live and work together, and how they shape the world. Through concrete experiences and anecdotes he draws his audience into a highly personal captivating journey. His TED Talk ​How to go to space, without having to go to space ​ has been viewed over a million times, and has a following from all around the world.

Vermeulen is a true contemporary polymath. He holds a PhD in biology, is active in the fields of systems engineering, architecture and design, is a photographer, a visual artist, wrote a book with a philosopher, and works with space agencies such as NASA and ESA. He is a TED Senior Fellow, and is currently pursuing a second PhD at Delft University of Technology in the Netherlands working on the topic of interstellar travel.

Vermeulen’s fascination for the future runs through everything he does. He loves to examine how the world works, and consequently how to break through established paradigms to come up with new and potentially disruptive ideas, both in his scientific and artistic work.

Vermeulen sees this activity of engaging with the future first and foremost as a global and communal effort. Over the past years he has been developing a multitude of art-and-science projects throughout the world, from the US to Southeast Asia, and beyond. He is a gifted community builder, and has been living and collaborating with people in places such as Yogyakarta, Taichung, Manila, Hawaii, New York and London. This enables him to learn from global traditions to create a better future.

His background as a scientist and his expertise in community building has led him to become Crew Commander of the 2013 NASA-funded HI-SEAS Mars simulation in Hawaii. For this project, he and a crew of five fellow ‘astronauts’ lived for four months in a dome studying the effects of long-term isolation on a small crew. The HI-SEAS Mars mission has made him think about the future of mankind both on Earth and in outer space.

As an artist Vermeulen is interested in working with technology and co-creating with communities. To date, that includes ​Biomodd, a worldwide series of art installations in which living ecosystems are built inside computers. And the​ Merapi Terraforming Project, an art-science project on the Merapi volcano in Indonesia set up after a large eruption in 2010.