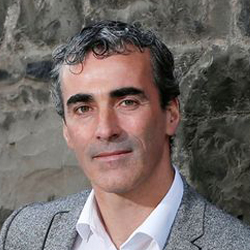 Originally from County Donegal, Jim was only a teenager when he was part of a Donegal squad that claimed the county’s first All-Ireland Senior Football Championship in 1992.

Jim was the coach when his club won their first ever Donegal Senior Club Championship title in 2005. He has represented his Province on a number of occasions winning two Railway Cup Medals, and has also represented his country in the International Compromise Rules Series against Australia in 1998, which Ireland won.

In 2010 Jim was manager of the Donegal Under-21 Football Team that won the Provincial Championship for the first time in fifteen years and reached the All-Ireland Final. In July of that year he was appointed Donegal Senior Football Team Manager.

McGuinness’ achievements have also been recognised internationally, earning the admiration of, among others, the golfer and Ryder Cup captain Paul McGinley and the Glasgow Celtic football manager Neil Lennon. On the 9th of November 2012, the Scottish soccer giants Glasgow Celtic confirmed the appointment of McGuinness as a performance consultant, while Paul McGinley has confirmed that McGuinness will have a role to play in the 2014 Ryder Cup. Having been invited to assist Glasgow Celtic in Scotland, McGuinness is the first Gaelic football inter-county manager to have been offered a role at a professional sports team abroad.

Jim holds a Master’s of Science in Sport Psychology from Liverpool John Moores University, School of Sport & Exercise Sciences. He previously gained a BSc (hons) Degree in Sport, Exercise and Leisure from the University of Ulster Jordanstown, and a Higher Certificate in Health & Leisure studies from Tralee Institute of Technology. He has previously lectured in Sports Coaching and Sport Psychology at Limavady College, Co. Derry, Northern Ireland.