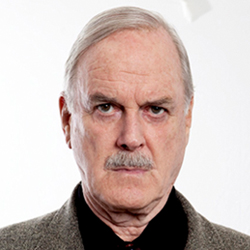 John Cleese is best known for being one of the founding members of the renowned comedy group Monty Python's Flying Circus and as the writer and star of the popular television comedy Fawlty Towers.

John Cleese studied Law at Cambridge University, where he met future fellow-Python, Graeme Chapman. During the Sixties he was a script-writer for a number of BBC TV and radio programmes, including the influential Frost Report, presented by David Frost.

The television comedy Monty Python's Flying Circus ran from 1969 to 1974 on the BBC. It was written and performed by John Cleese, along with fellow members Michael Palin, Eric Idle, Graeme Chapman, Terry Jones and Terry Gilliam. He also co-starred in and co-wrote the films Monty Python and the Holy Grail, Monty Python's Life of Brian and Monty Python's Meaning of Life.

Having left Monty Python, John Cleese achieved probably his greatest success when he wrote (with Connie Booth) and starred in Fawlty Towers, which ran for two series. It recently topped the British Film Institute list of the 100 Greatest British Television Programmes.

During the 1980s and 1990s John Cleese focused mainly on film work. He has won BAFTA and Emmy awards, and was an Academy Award nominated screen writer for his film, A Fish Called Wanda. He appeared in two James Bond films, The World Is Not Enough and Die Another Day.

In 1972 he demonstrated his interest in the business world when he set up the video training company Video Arts. The video used humour (and many of Cleese's colleagues from British entertainment) to show good business practice, such as time-management, communication, customer service and creativity.

John Cleese is a passionate advocate of the need to encourage creativity in business life. He challenges the basis of the decision-making processes prevalent in most of today's organisations. He argues that unless organisations are brave enough to reject the notion that business managers should think and act fast they will lose the ability to come up with innovative ideas and solutions and consequently put their futures in jeopardy. He proposes that there is a pressing need to harness the power of unconscious thinking.

On the corporate speaking circuit, John Cleese employs boundless energy and his inimitable sense of humour create a hilarious exploration of business basics, from corporate etiquette and customer service to creative thinking and problem solving.