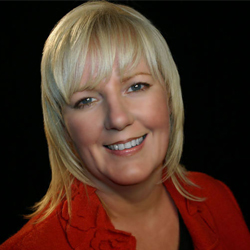 Molly Harvey is a Leading Authority on Leadership and Culture Change, who set up her first business from an attic bedroom in 1993. She is recognised for her no nonsense, thought provoking approach, speaking from the heart and from her personal experience.

A key part of her experience is her ability to question and provoke her audiences to think differently about the way they work and live. She speaks to corporations around the world such as Bank of America, 3M, Santander and over 500 leading organisations world wide.

She is the best selling author of ‘Seconds Away from Outstanding Leadership’ and has reached number 15 in Best Business Books in March 2012, and has produced a range of Ebooks, CD’s and Podcasts on her topic range. Molly regularly lectures at Universities such as Liverpool University, Liverpool Hope University and Liverpool Management School. She first spoke at the United Nations in New York in 2006 and 2007.

She was the first National Woman President and Fellow of the Professional Speakers Association in England 2005-2006, and current Fellow of the Royal Society of Arts and founding member of the Association of Transformational Leaders Council, Europe.

She is currently involved in projects were she takes the top one percent of CEO’S to Nepal and remote areas of the world, where they get involved with the local communities and tribes to solve a world problem and take the learning back to the work environment.

Molly is interviewed and quoted frequently in the media and radio in England, Ireland and America. One journalist quoted her as, “a business speaker who can help people do what most of us imagine is a gift bestowed only to the Richard Bransons, Tony Blairs and Paul McCartneys of this world; this woman enables people to set a vision and live from the end.” One client said “Molly Harvey is to Leadership what Seth Godin is to Marketing.”