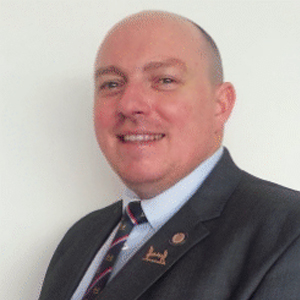 Thomas Stimpson has 26 years of military experience in the Royal Air Force having joined in 1988 and working in a wide variety of roles and was awarded the MBE in 1999 whilst serving with NATO, including in the Falklands, Basra, Iraq and Afghanistan.

Injured while in Basra in 2006 after falling during an IDF attack and sustaining a head injury, Stimpson went on to serve in Afghanistan in 2008 performing a challenging role in the repatriation of NATO forces. He collapsed with a seizure after his return from duty and it was discovered that Stimpson had an abnormality on the front of his brain. He was diagnosed with epilepsy often triggered by flashbacks or news reports on Afghanistan.

Stimpson provides a fascinating insight into the treatment he received and how it can help all those that will have experienced and witnessed trauma. He also brings a holistic open approach to a subject that many choose not to discuss that does affect the military and wider society.

Stimpson explains the techniques that formed a part of his treatment and that are used to treat soldiers. He outlines how they can educate leaders and businesses from any field in a clinical and corporate setting to get the best out of their people.

Stimpson has just finished his first book Wounded Minds which will be out in September 2016. His second book Mind Change will be published in 2017.

He has recently featured on BBC 1 as part of “The Road to Invictus” and has spoken at other leading organisations such as BNP Paribas Corpus Christi Oxford University, Home Office, Schools and recently for Mind Talks.