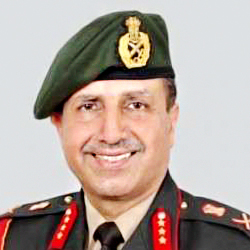 Lt Gen Sanjeev Madhok, PVSM, AVSM, VSM, is the former General Officer Commanding-in-Chief of the Army Training Command in the Indian Army. In his capacity as the Commander-in-Chief, he addressed a wide spectrum of core issues, spanning from concepts and doctrines to training for combat readiness and infrastructure development. Widely known in the Army as someone with a transformational outlook, he promoted Human Resource Development through innovative concepts like ‘Scholar Warrior’- someone with unrestricted thinking and the ability to look beyond the obvious.

General Madhok comes with a vast operational and administrative experience having represented India in a UN mission. Widely travelled throughout the world, he has addressed the Indo-US Military Cooperation Group (MCG) at the Pentagon. He has also served with the Ministry of External Affairs (2006) where he was responsible for holding the office of Director (Security Affairs), Eurasia Division.

A leading protagonist of leadership, motivation and morale, he has excellent communication, interpersonal, man-management and oratory skills, with the ability to multi task and also motivate and manage a large task force. A scholar par excellence, the General Officer has attended the International Crisis Management Course at National Defence College, Stockholm, Sweden. He also authored ‘Dare to Dream Big – Some Inspirational Thoughts on New Age Leadership, Philosophy of Life and Success’. The book is aimed at young military professionals.

General Madhok’s distinguished military career, including training with foreign armies, deployment with the United Nations (Iran-Iraq) and subsequent captaincy of the prestigious Army Training Command, Shimla (Think-Tank of the Indian Army), has given him considerable expertise to speak on leadership and related issues.The General has been known for his innovative thinking and stands staunchly for change and transformation in the Indian Army. He has articulated the new Indian Army Doctrine and also addressed key issues with respect to human resources and leadership development by transforming the various establishments across the country into Centres of Excellence.